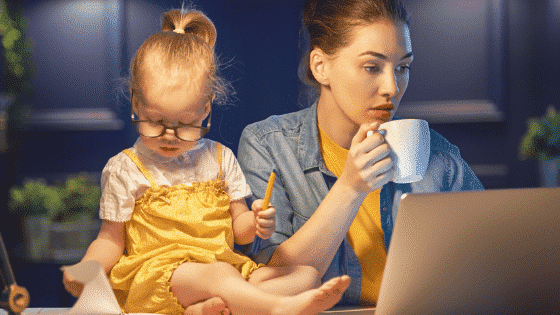 If you’re a woman who works (or if you know a woman who works—so, all of us), chances are you’ve heard whispers about The Motherhood Penalty. When a 2014 New York Times article called attention to the issue—and the gender-biased flip-side called the “Fatherhood Bonus”—it opened the discussion in no uncertain terms:

“One of the worst career moves a woman can make is to have children.”

The penalty functions like this: on average in the U.S., every time a woman gives birth, her salary and leadership opportunities suffer accordingly. And that’s on a child-by-child basis, so a mother with two children loses more opportunities than a mother of one. According to the Times, “Mothers are less likely to be hired for jobs, to be perceived as competent at work or to be paid as much as their male colleagues with the same qualifications.”

Meanwhile, men with children receive more empathy and higher wages, in part thanks to a problematic belief that the more children men have, the more they must provide for those children. This, in turn, encourages a vicious cycle of perceived dichotomies—men provide, women caretake at home, meaning there’s very little room for a woman who wants to do both and get paid fairly.

But the joke’s on us, America. Working moms are some of the best candidates for jobs, often especially thanks to those after-hours experiences that many companies write off. Here are just a few arguments why you should prioritize hiring working moms regularly and often.

There’s nothing like juggling full-time work, after school activities, pumping and nursing, tantrums, teenage rebellion, college applications—you get where we’re going here?—to teach you a thing or two about how to divide, prioritize, and conquer. Working moms know how to get things done because kids can’t wait. If they can manage all those competing needs, they can absolutely handle the challenges of work deadlines. Plus, they’re used to pushing through even the most daunting of tasks. Can you say the same about most new entry-level employees?

Work is About Quality, Not Quantity

You’ve probably heard some stats about how the future of work is going to be remote or flexible. By 2020, it’s likely that 25 to a whopping 50% of the workforce will be working at least part-time remotely. That’s good news for working moms but also for the (smart) companies that hire them. By prioritizing the quality of work over quantity, everything gets better. And for a working mom who’s learned how to make the most of her “on” hours, that means focusing during the hours she does work so that she can log off at a reasonable time each day. Expect great work in less time thanks to a woman who has a clear list of priorities.

There’s a common misconception that expecting mothers or new mothers won’t stay at their companies for long. But only 2% of working moms say they plan to leave their current work situations because of family responsibilities. In reality, most working moms are interested in a role that offers stability, support, and lasting opportunities to grow within the company. If you build a company for moms, the moms will come—and stay.

They Teach Colleagues the Value of Flexibility

The result is a trickle-down effect that encourages everyone to avoid burnout while also—and this is essential—appealing to new talent that’s drawn to companies that prove they value work-life balance. 61 million Gen Zers are about to enter the workforce, and studies find that they’re going to be much pickier about the companies they choose. Most of them, like working moms, are interested in flexible schedules and creative benefits as much as salaries. Those moms you’re considering hiring have a finger on the pulse, and they’d love to share their ideas.

The motherhood pay gap directly contributes to the wage gap, and it affects every woman who has (or plans to have) children. Committing to hiring mothers means that you’re intentionally addressing this bias, and focusing on the skills on a woman’s resume, not her personal life or career gaps. Every hire counts. Doing your part means doing better.